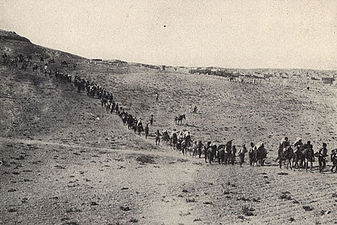 This chapter of Genocide A World History focused on modern genocides, starting in the late 1800’s to early 1900’s with the German killings in South West Africa, then continuing down the timeline to the Armenian Genocides and The Holocaust. The beginning of the chapter had a quote that stuck out to me, stating about “when nationalism began to hate” (65). I believe this quote resonates the main belief cultures have when starting “reforms” and “cleanses”.

The German killings in South West Africa was something I hadn’t read about or learned yet. The reasoning for murdering the African natives was simply to gain more land and demonstrate the power that Germany had to the French and British. The more genocides I read about, then the more frequently I hear about similar situations and reasoning for the genocides. Two other things that overlapped was the forced deportation of the native Africans into the desert and the careless killing of women, children, and even some German’s even when directed to be careful.

The second part of the book discussed the Armenian Genocides, which gave a brief description of what I am in detail reading about in “They Can Live in the Desert but Nowhere Else”. Although, one quote that surprised me was the statement from the Turkish ruler where he states the title of that mentioned book. Another statement that angered me was how the Turkish ruler justified the killings with three small reasons (p. 75) and seemed completely nonchalant towards his actions.

Lastly, this book discussed the Holocaust, following the chronological order of these modern genocides. There was a quote from an author that we will read a book from in the future, this quote was emotional in it statement of “non-men who march and labor in silence, the divine spark dead within them” (83). This quote caused me grief but also interested me in my future reading. Most of what I read about the holocaust was not new information to me, except for the point that the holocaust had the first use of industrial killing in a genocide. Although important to note is that the Holocaust buried the dead in mass graves, “a method that characterized genocides from the very beginning” (85).

What was the point in time when fighting and killing moved from tradition to industrial? What did this change in terms of amounts of deaths and amounts of violence?

Why is the German killings in South West Africa not commonly discussed? What other genocides have occurred in Africa?

How did the burial of people in mass graves become a “method that characterized genocides from the very beginning” and does this still remain true for current genocides?