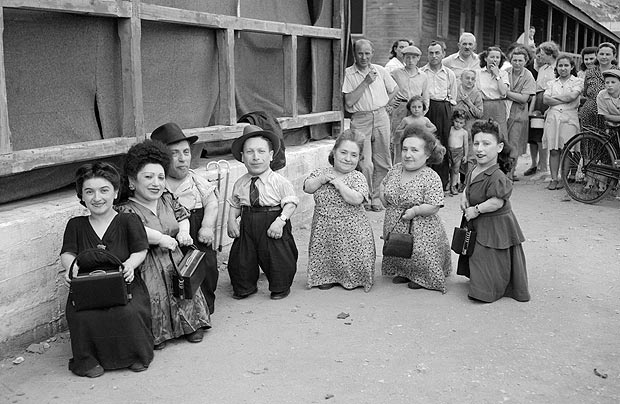 For the first movie screening we watched a documentary on a family that included seven Jewish dwarfs that made a living by preforming in show business during the holocaust. This movie was called “The Seven Dwarfs of Auschwitz” and was made by the Smithsonian which  had an interesting focus on some of the people targeted by the Nazi’s.

The doctor, Mengele, that took the dwarfs to study them further preformed inhumane tests, comparing them to tall people. This doctor had a collection of disfigured people that he considered his “zoo”. Some of the things he would do was pulling teeth, drawing blood everyday, and pouring freezing cold or boiling water into their ears. But, these test were not enough to survive and this dwarf family had to begin preforming again to keep themselves alive. This doctor was extremely creepy looking, scary, and every time they showed a picture of him I shivered.

Some facts were mentioned in the movie that related to Auschwitz, new facts that struck me. One was that they would usually have 5,000 people gassed a day in Auschwitz. Another is that they would have “doctors” pick out people in the crowds leaving the trains to get gassed that day, within thirty minutes. I was also surprised that the Nazi’s had performers and concerts on Sunday’s in Auschwitz. I wondered if these performers were allowed because of some sympathy they had for the Jewish people getting sent to their deaths. But, maybe the performers were to help the sanity of Nazi’s, to calm them down while they sent people to gas chambers. Overall, this movie was very interesting but also kind of strange.